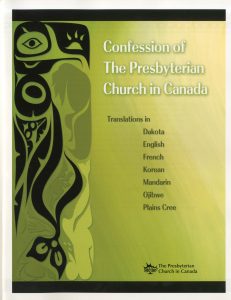 Following the United Church’s apology in 1986, the Board of World Mission  started a conversation, during its annual meeting in 1991, about the possibility of the Presbyterian Church apologizing for its involvement in Residential Schools. To hear from former students on their experiences, Rev. Ian Morrison, Rev. Dr. Ray Hodgson (Associate Secretary of Church and Society of the Board of Congregational Life of the Presbyterian Church) and Ms. June Stevenson (editor of Glad Tidings, the Women’s Missionary Society publication) were sent to Birtle and Kenora in July 1991. After hearing from former students that attended Birtle School and Cecilia Jeffrey School, Rev. Ian Morrisson reflected: “I realized at that time that a model of education that had been adopted and sponsored by my church had led to one of the most horrendous events in Canadian history. From this time forward I knew that my life would never be the same” (Bush, 2019, p. 2).

Following these meetings, the Board appointed a Committee of Reconciliation with Indigenous People to explore the possible development of a confession or apology to be presented at the 1992 meeting of the Board. This committee comprised of six people; two of which were Indigenous, and one of whom had attended Residential School. The committee’s goal was to write a confession of sin, putting the wrongdoings in a larger theological context as first and foremost a sin against God. The purpose of the Confession was to ask God and Indigenous peoples for forgiveness for the Church’s sins. The draft of the Confession was presented to the Board of World Mission at their meeting in March 1992. The Confession referred to the Residential Schools and its place in the larger colonizing activities and attitudes which the Presbyterian Church condoned and took part in. The draft confession was amended, and the Board agreed to present this document for adoption at the General Assembly – the Presbyterian Church’s highest court – in 1992. Further recommendations were to be presented to suggest how the Church could change its relationship with Indigenous peoples. However, many of the commissioners at the 1992 Assembly were ignorant of the Church’s involvement in the Residential School system. As a result, the Confession was sent back to the Board “for a more balanced presentation of the Church’s mission and ministry to native people” (Bush, 2019, p. 3).

After the Confession was first introduced to the General Assembly in 1992 it was brought back, largely unchanged, to the Assembly two years later in 1994. Around this time there had been further discussions about the impact of Residential Schools. At the Assembly, there were arguments raised against the Confession that suggested that one generation could not apologize for the sins of another. Despite this, the Confession was adopted by the General Assembly on 9 June 1994. The Confession was formally presented on 8 October 1994 at The Forks National Site in Winnipeg, Manitoba. This site is located between the Birtle School and Cecilia Jeffrey School, at the intersection of the Red and Assiboine Rivers. This has been a meeting place for Indigenous people for over 6000 years. Participants at the ceremony included: Phil Fontaine, Grand Chief of the Assembly of Manitoba Chiefs, Rev. George Vais, Moderator of the 120th General Assembly of the Presbyterian Church in Canada, Rev. Tom Gemmell, Principal Clerk of the General Assembly of the Presbyterian Church in Canada, Tamiko Corbett, Executive Secretary of the Women’s Missionary Society (W.D.), Kay Cowper, President Women’s Missionary Society (W.D.), Traditional Elders, Pritchard House Drummers, and former students of the Birtle Residential School. During the ceremony,  Rev. George Vais presented The Presbyterian Church in Canada’s Confession to Grand Chief Phil Fontaine. Since then, the Confession has been translated to six languages: Dakota, French, Korean, Mandarin, Ojibwe, and Plains Cree. Dakota, Ojibwe and Plains Cree were the first languages spoken by the Indigenous children who attended Birtle and Cecilia Jeffrey Residential Schools.

1994 Ceremony for the Confession

Video segment of the 1994 Confession at the Forks in Winnipeg, Manitoba. The video is converted from an old VHS tape that had unfortunately degraded resulting in a lot of blue screen. The audio, however, is good throughout.