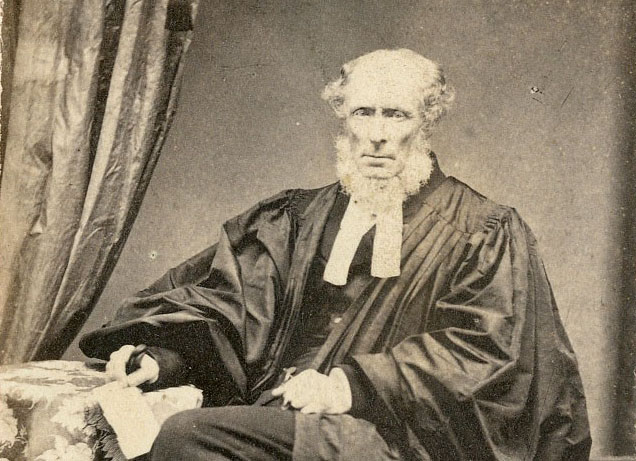 The following exhibit outlines the story of Rev. Mark Young Stark who served as the Presbyterian Minister in Ancaster, Ontario from 1833-1854 and in Dundas, Ontario from 1833 until his retirement in 1863. This exhibit was created using the Mark Young Stark family fonds and other records available at The Presbyterian Church in Canada (PCC) Archives.

Rev. Mark Young Stark was born on 9 November 1799 in Dunfermline, Scotland to Robert Stark and Elizabeth Stark. His parents were of high respectability. His father was proprietor of the Brucefield Linen Works at Dunfermline and his mother was originally Elizabeth Young of Cleish Castle. His grandfather was minister of the Parish Church at Tullybole. Stark’s mother died when he was just an infant, and after her death, he was under the care of his aunt Miss Grace Young. His father later married Mary Bannatyne, daughter of Dugald Bannatyne, Esq., whose family operated the Glasgow to Stirling Railway. Together they had one son, Dugald Bannatyne Stark. Robert Stark died in 1812, after which, Mark Young Stark was raised by the Bannatyne family. In 1835 Mark Young Stark married Agatha Georgina Street, daughter of Colonel Street of Ancaster. They had five children: Robert, Mary Ann, Elizabeth Mary, William Geddes, and Mark Dugald. A full list of Mark Young Stark’s immediate family can be found here.

Rev. Mark Young Stark received early education in Essex, England. He then took his MA at the University of Glasgow, graduating in 1821. He continued his studies in Theology at the University of Glasgow under Dr. Stevenson Magill. Upon completion in 1824, he was licensed to preach by the Presbytery of Glasgow in the Church of Scotland. However, he was unable to secure the required patronage to receive a charge and instead spent time as a tutor in a family of high respectability. Stark later conducted further studies on the European continent. He traveled to France, Germany, Switzerland and Italy. During this time, he studied fine arts in Rome and attended lectures at the University of France and Berlin. Stark also learned French, German and Italian languages and developed a keen understanding of botany. Mark had an interest in fine arts and was skilled in pencil sketching and water-colouring.

By the early 1830s Rev. Mark Young Stark was still without a charge in Scotland and decided to serve as a missionary for the Glasgow Colonial Society, which was founded in 1825 to provide clergy for the growing number of Scottish settlers in what is now Canada. The secretary of this society was Rev. Robert Burns, who in 1845 would also leave Scotland for Canada and become a colleague of Starks.  Mark Young Stark was appointed to Upper Canada on 19 February 1833, and on 26 September 1833 he was ordained as Minister to Dundas and Ancaster. He served as minister in Ancaster until 1854 and in Dundas until his retirement in 1863. In 1844 he was elected Moderator of the Synod of the Presbyterian Church of Canada in Connection with the Church of Scotland. He presided over the “Disruption Synod” which was held in Kingston in July 1844. At this time, the fragmentation of Presbyterianism in Scotland lead to similar division in what is now Canada. Stark desired unity within the church, despite sympathizing with the Free Church cause in Scotland. However, when division became inevitable, he eventually sided with those who broke away to form the Synod of the Presbyterian Church of Canada (generally known as the “Free Church”). Following this disruption, he was elected the first Moderator of the new Synod. Stark wrote a lengthy defense of the division in Canada for the first issue of the Ecclesiastical and Missionary Record for the Presbyterian Church of Canada in August 1844. He served as clerk of the Presbytery of Hamilton from 1841 to 1844 in the undivided church and 1844-1857 in the Free Church. In 1844 Stark was invited to serve on the College Committee for the development of Knox College in Toronto. He also served for a number of years as Convener of the Home Missions Committee, where he served closely with Robert Burns. When the United Presbyterian Church and the Free Church united in 1861 Stark oversaw the reception of the United Presbyterian congregation in Dundas into Knox Church.

In his later years Stark’s health was failing. Due to this, he resigned his charge in 1863. The Synod allowed Stark to continue counselling after the Presbytery of Hamilton made an application to retain Stark’s name on their roll as a Minister Without Charge. During this time, Stark preached occasionally in vacant congregations in Dundas and provided ministerial assistance to his successor, Rev. John McColl. Stark delivered his last sermon on the evening of 7 January 1866 in Knox’s Church. For a time Stark enjoyed improved health, but he was later diagnosed with pleurisy. Mark Young Stark passed away on 24 January 1866 surrounded by all members of his family, except his eldest daughter who was visiting Scotland at that time.

There are handwritten sermons, poems, and prayers in the fonds. While some were written by Mark Young Stark, most of these were written by his brother Dugald Bannatyne Stark, his mother-in-law Mary Ann Street, and his son Robert Stark. These documents were written between 1827-1908. There is a published book of sermons entitled Sermons by Rev. Mark Y. Stark, A.M., which was published by James Campbell & Son in 1871.

The fonds has two scrapbooks comprised of postcards, photographs, picture cut-outs, pencil sketches, ink drawings, and small water-colour paintings. The items are largely unsigned and undated. Some of these are signed by Mark Young Stark and Mary Ann Street. These documents were dated between 1825-1855. Also included in the fonds is a small case of architect’s tools belonging to his brother-in-law Rev. George Charles Street.

Burns, R. (1845, October). Home missions. Visit to the Bathurst District. The Ecclesiastical and Missionary Record for the Presbyterian Church of Canada 2(3), 123-124.

Stark, M.Y. (1845, October). Journal of a visitation of a portion of the bounds of the Presbytery of Kingston. The Ecclesiastical and Missionary Record for the Presbyterian Church of Canada 2(3), 124-125. 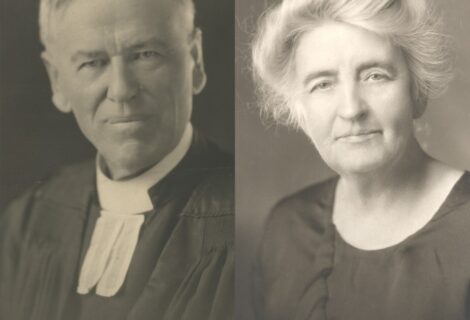